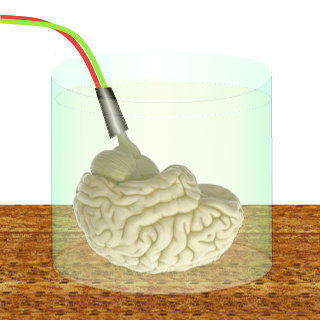 "Anyway, you're just a brain in a vat"

I can't remember what the argument was about but was forced to agree that in fact some time ago while i slept an evil scientist sneaked into my bedroom and stole my brain and is now keeping it alive in a vat full of gloop. All memories of my abduction have been erased and all i experience is being fed to me via my severed spinal cord, all controlled by a Big Computer with whirling tape drives and banks of flashing lights.

Folklore has it that this story was first popularised by the Harvard philosopher Hilary Putnam in the 1970's, but it was obviously preceded by Descartes' 'evil demon' that hid real reality from him, and even further back by Plato's cave, where we can only see shadows of what's outside.

Some years later i wondered what HP had actually said and discovered he was talking about words, and also not making any sense at all.
How disappointing! So here's a blog starting off with a rant or two about philosophy.